FRANCO CORELLI EDITION VOL I: AN ARDENT LESSON FORMAT: MP3 DOWNLOAD (THIS IS NOT A CD, THIS IS A MP3 DOWNLOAD !!)
€12.99
In stock
SKU
dl_15
Skip to the end of the images gallery 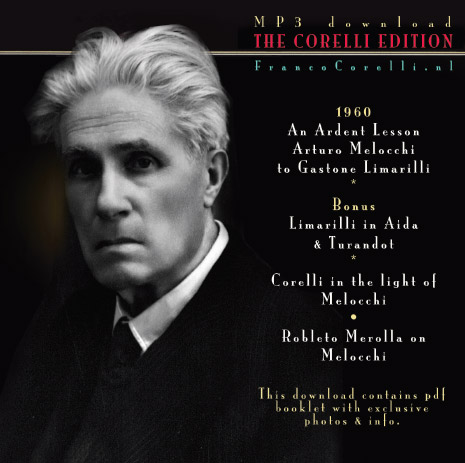 For Franco’s 92nd birthday commemoration on April 8, 2013, we produced the 2CD–MP3 Download issue ‘An Ardent Lesson’, which deals with the beginnings of Corelli’s career, precisely with his studies with Arturo Melocchi. In the wake of writing Prince of Tenors, I was given a copy of a voice lesson that Arturo Melocchi gave to the tenor Gastone Limarilli, presumably around 1958. Melocchi teaches Limarilli the interpretative finesses for ‘Celeste Aida’ and sections of Turandot. Among the latter is the famous passage ‘Ti voglio ardente d’amor’, which appears at the end of the riddle scene, after Turandot begs her father not to marry her off. Most tenors shun the optional high C there, but Corelli always sang it in performance (an intriguing rehearsal tape confirms that he reserved his top notes for the audience, whilst saving himself in rehearsal). When Melocchi explains Limarilli how to sing it on stage, Limarilli tells him that he always sings the lower option. Melocchi, rather outspoken on this candid lesson, exclaims that this is ‘bruta’ (ugly)

Our MP3 download brings the tracked and annotated voice lesson of Melocchi to Limarilli in acceptable sound quality (rather than the quality given in the YouTube excerpts of this lesson). Even if you don’t speak Italian, you will be able to follow the lesson. In addition, you find the excerpts rehearsed in full renditions by Limarilli, as well as by other Melocchi pupils Mario Del Monaco, Franco Corelli (in an imperative live performance from Monaco, 1960), and Melocchi’s last pupil, Robleto Merolla. The latter also features in an interview excerpt with the undersigned. I interviewed Merolla, who died in 2010, in the wake of writing Franco Corelli The Legacy. Filmed excerpts of Merolla explaining Melocchi’s lowered larynx technique can be seen on FrancoCorelli.nl, in the Ardente section. Through splicing Franco’s Calaf renditions of the sections rehearsed into the lesson on the bonus tracks, you can hear exactly on what anvil Corelli’s Calaf was forged.